Pop-star, rock-star, fashion icon. Who is the goth cowboy Lil Tracy and where exactly did he come from? Jazz Ishmael Butler, aka Lil Tracy, has become somewhat of an enigma. The self proclaimed Saturn Child remains in a constant state of evolution. Transcending music genre norms for over a decade, Tracy plays by his own rules. Effortlessly re-imagining his sound, image, and moniker; he has maintained his presence at the forefront front of the hip-hop underground.

Tracy emerged on the scene at a unique time in music history commonly referred to as the, “SoundCloud Rap” era. Spanning from the late 2000s through the early 2010s; a plethora of musicians were gaining significant momentum on the free music sharing platform, SoundCloud. As an innovator of the culture, Tracy would go on to become one of the early pioneers of emo-rap music. Fusing emo-melodics with rhythmic hip-hop flow, Tracy has undoubtedly mastered a niche sound which has opened the doors for countless artists to follow suit.

As the son of two accomplished musicians, it would seem that Tracy was destined for the spotlight. Nevertheless, he often felt alienated from his peers and family members alike. He spent his childhood growing up on the streets of Virginia Beach. This allowed him to draw early inspiration from southern hip-hop and emo music. Tracy’s parents would eventually separate, resulting in a move to Seattle, Washington. Seattle’s bruting punk rock scene would only encourage Tracy’s renegade antics; simultaneously becoming a major influence on Tracy’s future sound and aesthetic.

Tracy’s adolescence was spent escaping the mundane; school expulsion and an arrest record ensued the troubled youth. It was evident that he had his qualms with authority. Choosing to be homeless at sixteen, he stole a tent and moved into the woods with a few friends.

In a 2018 interview with media collective, “Mass Appeal”, Tracy stated, “When I was young, I just felt like there was some sh*t missing…like just being normal and going to school and sh*t…so I did my own sh*t.”.

Making music would become a creative outlet for Tracy. It allowed him to safely express the emotional turmoil he often internalized. Influenced by psychedelics, Tracy soon ventured in his sound. Sub genres of hip-hop such as; “trip-hop” and “witch-house” were becoming a part of Tracy’s collective influences.

Tracy accredits frequent acid trips to furthering his development of self awareness. Unfortunately, this expansion of consciousness only further distanced him from those around him. This feeling of alienation is referenced in future hit record, “Witchblades” feat. Lil Peep. Tracy’s opening line states: “In high school, I was a loner, I was a reject, I was a poser. Multiple personalities, I’m bipolar. I swear I mean well, I’m still goin to hell.”.

Undenounced to his parents, Tracy moved to Los Angeles to further peruse his music aspirations. Making headway under the moniker, “Yung Bruh” in 2012, Tracy quickly gained the attention of music label, “Thraxxhouse collective”. While releasing several mixtapes with the label, he became acquainted with a handful of like-minded recording artists and producers. The connections made on Thraxhouse would eventually lead to a ten man supergroup known as GothBoiClique (GBC).

New York Recording artist, Lil Peep, would be the final addition to join the GBC collective. As mutual fans of each others work, Peep had developed an online friendship with Tracy prior to meeting in person. The creative chemistry was instantaneous between the artists. Within 24 hours of meeting, Tracy and Peep recorded the viral hit, “white tee”; in addition to shooting the music video for the track. The momentum would continue to build for the duo resulting in over a dozen successful collaborations together, the two were an inspirable force, carving their way through the hip-hop underground. What started as a music venture would result in a brotherhood. On top of the world, their efforts would eventually land them on the Billboard Hot 100, “Awful Things” reached 8.2 million U.S. streams.

Tragedy would strike when Lil Peep passed away due to an accidental overdose in 2017. Peeps passing was a devastating loss for Tracy. Today, Tracy continues to memorialize the late Peep while successfully furthering his solo music career.

June 12th, 2022: Lil Tracy’s Space Odyssey Tour lands in Denver, Colorado. Alongside Tracy, alternative rap heavyweights, “Brennan Savage” and “drippin so pretty“, prepare to shut down Cervantes Masterpiece Ballroom with an unforgettable experience. The energy in the room is palpable as fans anticipate opening artist drippin so pretty to take the stage. Performing infectious hit songs such as, “Bad News” and “Betrayed”, the Cervantes’s crowd is noticeably elevated. Clusters of fans begin to flood to the main stage; only a few tracks into the opening performance.

Within moments, concert goers are packed in tightly, almost shoulder to shoulder. With precise timing, Brennan Savage transitions the atmosphere of the venue; taking to the stage ominous melodies like “Numb” and “Cold World”. The perfect groundwork has been laid down for Lil Tracy’s headlining performance; fans feverish for the goth superstar’s arrival.

Memorializing the late legend, Tracy performs several sentimental Peep collaborations for the Denver crowd. Unforgettable hits such as, “I Crash, You Crash” and “Awful Things” immerse the room with heart-felt nostalgia. Many with tears in their eyes, fans chant alongside Tracy’s performance word for word. A sea of white light soon fills the venue as concert goers hold their cell phone light to the sky. While continuing to pay homage, Tracy flips the script. Carrying out the twos undeniable club anthems such as, “Witch Blades” and “white tee”; pockets of mosh-pits emerge in the spirit of comradery. This is what the Cervantes crowd came for. 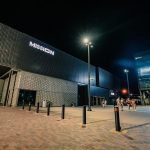 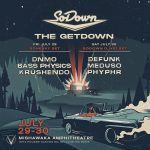