Concert season is here and people are craving live music after not having it for almost two years. Temple Denver is giving the people exactly what they want with a fire lineup for June. Between the fantastic environment and even better beats, these shows are definitely going to be bangers, so let’s get into the lineup.

Starting our monthly lineup is Montell2099. Hailing from Auckland, New Zealand, Montell2099 brings his housey vibes to Temple’s LvL. Montell2099 has been making music since 2010 where he first started making music in his grandparents house. His music has grown since then. He has been playing Summer Camp Festival before coming to LvL, so you know that he is going to bring that same festival energy to LvL.

Next on Temple’s lineup is Kromi. Born and raised in China, Kromi’s music is the perfect blend of tradition and the new age. A former pop singer turned producer and DJ, Kromi is classically trained in music theory. Bringing this knowledge to her house music, every song she makes is an absolute banger. She is one of many new self made artists that are emerging from Asia.

Bringing the fire to the Friday lineup is Nostalgix. 25 year old Nostalgix hails from Vancouver. This bass house DJ has made quite a name for herself, playing multiple festivals, most recently being EDC just a few weeks ago. If that wasn’t cool enough, she also just dropped her latest high energy single, “My Type” a few weeks ago.  Bringing the same high level of energy to every show, Nostalgix is one show you just can’t miss.

Laidback Luke is a music industry veteran, with over 20 years of music experience under his belt, including being the founder of MixMash Records. Born in Manila and raised in North Holland, Laidback Luke brings his global sound to the main stage of Temple. Known for his dance music, Laidback Luke was nominated for “Best European DJ” in 2012 by the Dance Music Awards.

Opening the weekend in LvL is Tisoki. Born in the UK, now living in LA, this bass house producer and DJ is bringing the heat. His most recent song, “TELL ME” just dropped on the Monstercat Soundcloud on May 9th. Also known for his tracks on the game, Rocket League, this is one producer you know is bringing that energy.

The following week, Charles D is bringing the New York techno heat to Temple. On top of his weekly techno radio show, “Synthesized Radio”, Charles D is known for his chart topping song, “You.” He has most famously toured with Eric Prydz and also had several song releases under Eric Prydz’s music label, Pryda Recordings.

Party like it’s Wenzday on the 24th. A bass house DJ from the Bay Area, Wenzday has made waves in the industry. Graduating from Icon Collective Music School, she brings the music theory and knowledge to her wubby house beats. She also has a weekly radio show on Dash Radio, called “Everyday is Wenzday.” She has had several releases under the Insomniac label and helped to co-found the bass label 40oz Cult.

Wrapping up our lineup for June is Lucati. Coming from the underground rave scene in LA, this house producer and DJ has over 10 years as a performing artist. He helped to co-found Kolme Records. Most recently, his song, “Crowd Go” dropped on May 13th. On top of that, he is also playing Beyond Wonderland Music Fest before crash landing at Temple!

The month of June has tons of different artists performing at Temple. Whether you are looking for techno or bass house, there is an artist to see at Temple! For more info on these events, visit Temple’s website. 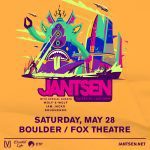 Win 2 tickets to Two Friends on Thursday, May 25th! 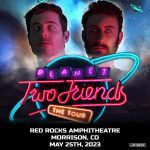