A brutal snowstorm reared its ugly head around Denver on Saturday, February 11th, 2022. However, it wasn’t able to stop another fantastic bass music show from happening. 3,000+ headbangers sold out and packed the Mission Ballroom with passionate energy. The master of low resonance and heavy metal was about to take center stage.

Keaton Prescott, better known as Sullivan King has been singing and playing guitar since he was a teenager. To add onto his acoustic skills, he has been a DJ and producer under the Sullivan King project since 2014. Since, the ICON Collective graduate has performed at several bass music festivals such as Lost Lands, Ever After and Moonrise Festival. His unique fusion of metal and bass music has received nods from dubstep giants such as Excision, and has made bass-hungry fans salivating for more.

Draped in a long, gray hoodie, jet-black jeans and a kelly green hat, Local DJ PAWS had the first start the show. His energetic presence ignited the bass-savvy crowd as he supplied a unique blend of dubstep, hardstyle and trap sounds into his mix. After his set, he congratulated the crowd for braving the cold weather and cited the Mission audience as “the greatest crowd [he’s] ever performed in front of.”

A wave of excitement fell over the crowd as Layz was the next act up. She came in with a very youthful and ecstatic presence. The 21-year old Maryland native then proceeded to take the stage by storm. Visuals of lightning bolts and mosh pits from the crowd complimented her musical style of heavy dubstep. Layz‘s performance was a massive reason to get excited about the future of bass music. Her radiant positivity and skills on the decks were simply electrifying.

Following Layz was Blanke and Trivecta playing a back-to-back set. Aside from their usual musical styles of future bass and midtempo, their set was an opposition of dubstep bangers. What made Blanke and Trivecta‘s set special was the way they portrayed themselves as friends on stage. Their bond really personified their set together, as they both consistently hyped each other up at every bass drop. The Australian Blanke and the Tampa native Trivecta‘s unorthodox pairing proved to be a success with Denver’s gathering of headbangers.

It would be safe to assume to Sullivan King turned a nasty blizzard outside into a winter wonderland of bass inside of Mission. His on-stage attitude, laced with head banging, intense excitement and frantic guitar-playing spoke just as loud as the music he played. If Eddie Van Halen is an icon of rock, Sullivan King is surely an icon of the bass music scene. At this show, he carried an unmatched and energetic performer that all DJs in this scene strive to duplicate. Sullivan King has really been a pleasure to follow over the years as both a performer and a producer. When he started out with his project, his metalhead persona brought heavy rock fans to EDM shows. Now, because of shows like Saturday’s at Mission Ballroom, they grace the white and red baseball jerseys that bare his name. 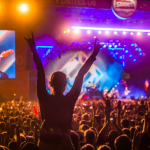 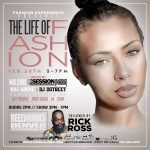