On November 10, 2022, Slander made their return to Red Rocks on their Thrive tour.

Since 2014, Slander has steadily been making a name for themselves through their uplifting and vibey sounds. Slander is a duo consisting of Derek Andersen and Scott Land, based out of Los Angeles, CA. Derek and Scott attended Icon Music Collective together, where they met their good friend and biggest inspiration, Tyler Marenri, also known as Nghtmre.

Nghtmre and Slander performed, toured, and collaborated as “Gud Vibrations” while also developing their own unique sounds. You are probably familiar with Slander’s earlier heaven trap hits dating back to 2014 with their We Like to Party remix, Love Is Not Enough remix, and Up All Night remix. Shortly after, Slander and Nghtmre released their first single, Gud Vibrations, which elevated their rise into the spotlight.

The Rise of Slander

After this, Slander released banger after banger with massive hits like Love Again, Superhuman, You Don’t Even Know Me, First Time, Love Is Gone, and many more, moving away from the heaven trap side and more into the future bass and dubstep side. Their sound is described as either soulful, euphoric melodies with beautiful lyrics or heavy, girthy bass with a punch. Nonetheless, Slander has become a household name in the EDM community for their ability to make one both headbang and cry in the same set.

Nitepunk opened the second night of Slander’s Red Rocks stop with some funky and vibey trap that helped the crowd get moving. With breakbeat buildups and deep trap drops, Nitepunk started the night in a significant way.

Leotrix switched up the vibe a bit with some high-energy riddim! It was such a refresher to elevate the energy early in the night and bring in the heaviness. Leotrix definitely satisfied the bass heads in the crowd.

For a complete switch-up, Slander booked Dimension as one of the openers for some old-school drum and bass! With the rise of the sub-genre creeping into the bass scene, people could help but get moving with Dimension’s lively sounds. They helped people get moving to stay warm throughout the progressively cold night.

A staple in the bass music community and Denver fan favorite, Eptic pulled up as the last opener and brought some old-school bass into the mix. He played out some of his older classics and perfectly mixed in his newer tunes to make for a super fun dubstep set.

Slander’s return to Red Rocks went a little something like this. Starting with a beautiful intro to Walk On Water and slowly creeping into a fiery bass-filled Move Back drop, Slander did not come to play around. The first half of the set was filled with heavy bass bangers dropping one after another! Slander threw in massive tunes like their collab with Svdden Death called Blood On Me, Back to You, and Gravity. Later on, in the set, they moved into their popular sing-song tracks like First Time and Potions. The crowd was singing and screaming at the top of their lungs as they held their friends tight. Later in the set, they switched it up and played their newer dark techno song, Before Dawn, as everyone danced. The night ended with Superhuman as the crowd became illuminated with light. Overall, the crowd’s energy proved to be unbeatable, and the night was filled with many smiles, tears, hugs, and headbanging.

Production this year was still excellent but, compared to previous years, could have been a bit more involved. The infamous Slander “Eye” was in the middle of the stage, always equipped with fire and lasers. The Slander logo was projected onto the rocks as well. The late announcement and weekday dates for the shows may have been indicators of late production planning, but Slander still came through and threw down a fantastic set. 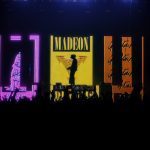 Slander's Night One Of "Thrive On The Rocks" Was Exhilarating 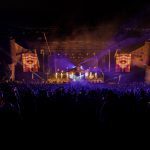