Sfam headlined Cervantes Masterpiece Ballroom in Denver bringing a spicy special guest along for the night.

Starting the night off was Contra Scandal. He is a Denver local producer known for producing deep bass tracks and incorporating the violin into his live sets.

The next act of the evening was Big City. They are a duo based out of Virginia producing experimental bass music. Big City really got the crowd moving. They are known to release a lot of music with Meso’s music collective “Spicy Bois.” They have also released an EP with Boogie T’s Label “Drama Club Recordings“.

As the night went on UM.. (um dot dot) graced the stage. They have so much original music released independently. In addition, they have released music on labels such as “Electric Hawk” and “Dead Beats”. All in all, they really set the tone for what was to come.

Once the time came for sfam, they wasted no time to get into their set. These guys didn’t come to the bass capital to not drop some heavy-hitting bass. They also debuted multiple unreleased IDs and collaborations such as a new song with fellow New Orleans producer Tvboo, getting a cheering reaction from the crowd.

After sfam concluded their set, they were preparing to bring out the special guest they’ve been teasing for a few days prior to the event.

As they announced that they had brought Meso founder of music collective “Spicy Bois” out to play the remaining hour slot of the night, the crowd went crazy. Throughout his hour-long set he played out his newest collaboration with LSDream “Love Rocket.” This lineup of artists was all around stacked for some up-and-coming experimental bass producers to push their sound. 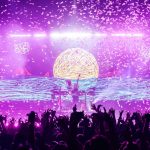 San Holo's Euphoric Sounds Are Coming To The Mission Ballroom