In the early days of COVID becoming a household term, it became pretty clear that live music would be taking a backseat for a while. With that said, many hoped that by late Summer, it would be behind us and we could all join our friends at red rocks for a beautiful night of music with Rufus Du Sol. Unfortunately, this proved not to be the case and was rescheduled twice to finally land on dates in 2021. However, in the end this is what made this night so truly special. This was a return for Rufus of nearly 18 months and boy, did they deliver!

No Party is Complete Without Friends

No party is complete without some friends, which is why Rufus Du Sol brought some great ones to party with them. Cassian, a longtime friend of the group graced the stage as the first act of the night. The crowd provided a welcome vibe as the night opened up, clearly excited for what was to come. The artist had some great guitar skills which clearly impressed the audience. He made for a great opening which paved the way for the next act to follow.

Next up was Monolink, a multi-instrumentalist, producer and songwriter. He brought an awesome, melodic, one-of-a-kind auditory experience for the crowd. He was a perfect blend of ambient vibes and upbeat energy, a great bridge between Cassian and Rufus. The music carried throughout the rocks, bodies ebbed and flowed and smiles were abundant.

At the conclusion to Monolink’s set, there was a set change to build up to the moment the crowd was waiting for. The stage lit up, and three platforms appeared, each wrapped in their own LED panels. The energy soared, and we could feel it from the front to back. It was time. Each of the three musicians entered the stage, and the night was on. Opening with the dance anthem “Underwater,” Rufus started simply and built their way up. Lead vocalist and frontman Tyrone Lindqvist captured the crowd and support of his bandmates in a way we have come to expect from the trio.

The crowd was extremely energized and filled with cheers. They played through old and new songs, including their brand new song “Next to Me”. The crowd cheered and ate up every second of the ethereal sounds of their newest track. Pretty impressive as the song only just released.

A major high point of the night was the iconic track, “Eyes” which brought in a huge round of crowd support. It was a clear connecting point across all Rufus du Sol fans and they all chanted in unison. The lights were perfectly matching the mood, with spots coming and going on the three musicians and lazers bouncing of the beautiful rocks.

Its been a long time since Rufus Du Sol was originally set to walk on the Red Rocks stage. This is why the night was a long time in the making. Because of this, it was clear that fans had been waiting with bated breath. This couldn’t have been a more perfect show for fans and for the prestigious venue. It was truly a magical night. 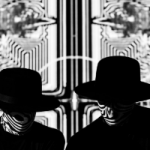 Going Under Construction With Chris Lake And Fisher 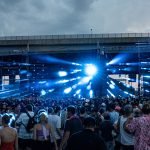