The concerts of 2022 are coming in hot! Action Bronson played a banger of a hip hop show last night at Mission Ballroom. Mission Ballroom, one of Denver’s newest venues, is known for hosting both intimate and large shows, thanks to the first-of-its-kind flexible stage. Last night, Mission Ballroom was graced by the NBA Leather Tour featuring rapper Action Bronson, Earl Sweatshirt, The Alchemist, and Boldy James. All of these artists have released or are releasing new music so it was sure to be a good night.

First on stage were the Alchemist and Boldy James. The Alchemist is a rapper and producer hailing from Beverly Hills, California, while Boldy James is a rapper from Detroit, Michigan. With the perfect combination of East and West, these guys make hip-hop sound just right. The Alchemist, behind the decks, was dropping hot beat after hot beat. Meanwhile, Boldy kept the crowd singing and dancing. They played some bumping songs from their new album “Bo Jackson,” which had the crowd getting down their whole set!

The Beat Goes On

Up next after a brief intermission were Earl Sweatshirt and Black Noi$e on the decks. A Chicago-born rapper, Earl Sweatshirt brought that Chicago hustle to Denver for a night.  His brand new album, “Sick” just dropped on the 13th of this month, so he came ready with some fire from it. Black Noi$e hails from Detroit and his grimy beats showed it.  By the end of their set, the crowd was moshing and shouting, ready to keep the party going.

Finally, after another brief intermission, the crowd finally got what they came for: Action Bronson. From making bread in a New York bakery just a few weeks ago, to making that bread on the stage, Action Bronson gave it his all with each of his endeavors. Born and raised in Queens, New York, Action Bronson was born with the heart of a hustler. Outside of his music career as a rapper, Action Bronson is a TV persona, hosting his own show, “F*** that’s Delicious,” and an author, with his latest book, “F*** It, I’ll Start Tomorrow” on pre-order now.

While his books feed the mind, and his show feeds any appetite, his music truly feeds the soul. With Daringer behind the decks, Action Bronson came out full of energy, throwing water bottles into the crowd and flexing. He played some of his top hits, including “Baby Blue” and “Red Dot Music” that got the crowd hyped. His experience as a story teller truly showed in his set, with many dramatic and high-energy moments .His hype and dramatic stage presence had the crowd begging for more. At one point, he showed some love by throwing pre-rolls into the crowd! He finished off his set with gratitude and love for Denver and the crowd gave it right back.

Action Bronson and his NBA Leather Tour are traveling to Chicago next. Get the tour details here. 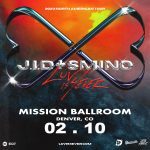 Win 2 Tickets to the SOLD OUT J.I.D & SMINO show on Friday, February 10th! 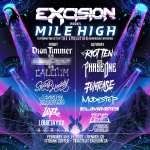