After recently releasing a new Album “Melt My Eyez See Your Future“, Denzel Curry took over Mission Ballroom in Denver, Colorado. Bringing along a killer lineup of Talent with him on the tour, Mike Dimes opened up the evening really getting the crowd going with his hit song “Backroom“. Next on the bill rap duo was “AG Club” bringing high energy to the stage really priming the crowd for Denzel.

Taking the stage with ease, Denzel began his set with the first track from the new album “Melt session #1” a very poetic track that tells a story. As he continued to preform multiple songs from the album, Denzel also played many older tunes including “Clout Cobain” and “This Life“. Denzel had full control of the crowd from start to finish bringing the energy in Mission Ballroom that night through the roof!

Don’t miss your opportunity to to see this amazing tour as it continues across the country making a stop in a major city near you!

Sfam headlined Cervantes Masterpiece Ballroom in Denver bringing a spicy special guest along for the night.

Starting the night off was Contra Scandal. He is a Denver local producer known for producing deep bass tracks and incorporating the violin into his live sets.

The next act of the evening was Big City. They are a duo based out of Virginia producing experimental bass music. Big City really got the crowd moving. They are known to release a lot of music with Meso’s music collective “Spicy Bois.” They have also released an EP with Boogie T’s Label “Drama Club Recordings“.

As the night went on UM.. (um dot dot) graced the stage. They have so much original music released independently. In addition, they have released music on labels such as “Electric Hawk” and “Dead Beats”. All in all, they really set the tone for what was to come.

Once the time came for sfam, they wasted no time to get into their set. These guys didn’t come to the bass capital to not drop some heavy-hitting bass. They also debuted multiple unreleased IDs and collaborations such as a new song with fellow New Orleans producer Tvboo, getting a cheering reaction from the crowd.

After sfam concluded their set, they were preparing to bring out the special guest they’ve been teasing for a few days prior to the event.

As they announced that they had brought Meso founder of music collective “Spicy Bois” out to play the remaining hour slot of the night, the crowd went crazy. Throughout his hour-long set he played out his newest collaboration with LSDream “Love Rocket.” This lineup of artists was all around stacked for some up-and-coming experimental bass producers to push their sound.

The energy Wreckno brought to Denver recently is unmatched! From staying interactive with the crowd throughout the whole performance, the flow artists, and the visual laser display Wreckno had, fans at Cervantes were certainly in for a treat.

Kicking the night off was Cervantes resident host Mikey Thunder. He scratched over some low-fi Hip-hop beats accompanied by a vocalist.

Up next was Bankaji, a Denver local who played an all-original set rinsing through multiple deep bass tunes within his hour slot. Bankaji played “Wrong Numba” a collaboration with Trip Drop and his newest release “Meep“.

Huxley Anne producer and DJ based out of Los Angeles then came to play one last set before Wreckno‘s headlining act, displaying numerous of her new and unreleased tracks!

Wreckno closed out the night with a bang, playing a mixture of drum and bass, dubstep, and freeform bass. As soon as he took the stage, the crowd erupted with cheer. He opened up his set with a remix of his most popular song “Medusa” with EDM icon Griz, which really had the whole room rumbling. Wreckno also played a few unreleased tunes from his friends Charles the First and Of the Trees. Throughout the set, a variety of flow artists from Kinetic Spinners displayed their talents alongside Wreckno on stage! (captured above)

Overall, Wreckno brought the heat to Cervantes and really dropped it low! He is truly for the people exclaiming his love for his fans and the people of Denver!

This past weekend RL Grime stopped in Denver at Mission Ballroom for his Community Outreach Tour. He brought out artists from his label, Sable Valley, which included artists Jawns, Knock2, and Pauline Herr. If you have yet to attend a show at Mission Ballroom now is the time! From their in-house sound system, LED screen, and lighting display this venue is truly amazing.

Starting off the night was Pauline Herr. She started the vibes for the rest of the night. Next up was Knock2 who definitely brought the heat with upbeat sounds getting the crowd ready to dance the night away. Following the dance beats was Jawns. With good beats and throbbing bass lines throughout the evening, the energy from the crowd never seemed to decline.

RL Grime closed out the evening with an hour and a half long set. He played some of his hit tracks like “UCLA ft. 24 Hrs”, I wanna know, ft Daya”, and his popular remix of “In your head” by G Jones.

Trippie Redd came through Denver Colorado this past Tuesday for a stop on the Tripp At Knight tour with SoFaygo and K Suave.

Starting out the evening, K Suave came out with all the energy truly igniting the crowd! Throughout his performance K Suave displayed his appreciation for his supporters, getting in the crowd amongst everyone while continuing to perform! Following K Suave, SoFaygo came to the stage with some heat starting the set with his song “Off the Map”. While performing he took off the hoodie he was wearing and threw it into the crowd as the beat dropped.

Rounding up his North American tour Trippie Redd has truly made his mark. From the massive LED screen, Co2 canons and light show this tours production is one to be reckoned with! Aside from the amazing display of the production and his visuals Trippie Redd ended the night with a bang. Rinsing through numerous of his platinum songs such as “F**k Love” a collaboration with XXXtentacion and “Taking a Walk” a track from a previous album, Life’s A Trip. The Crowd was eager for him to perform his latest hit “Miss the Rage” with Playboi Carti, right when the beat dropped for the song the crowd went crazy! Trippie Redd truly performs like a rock star! 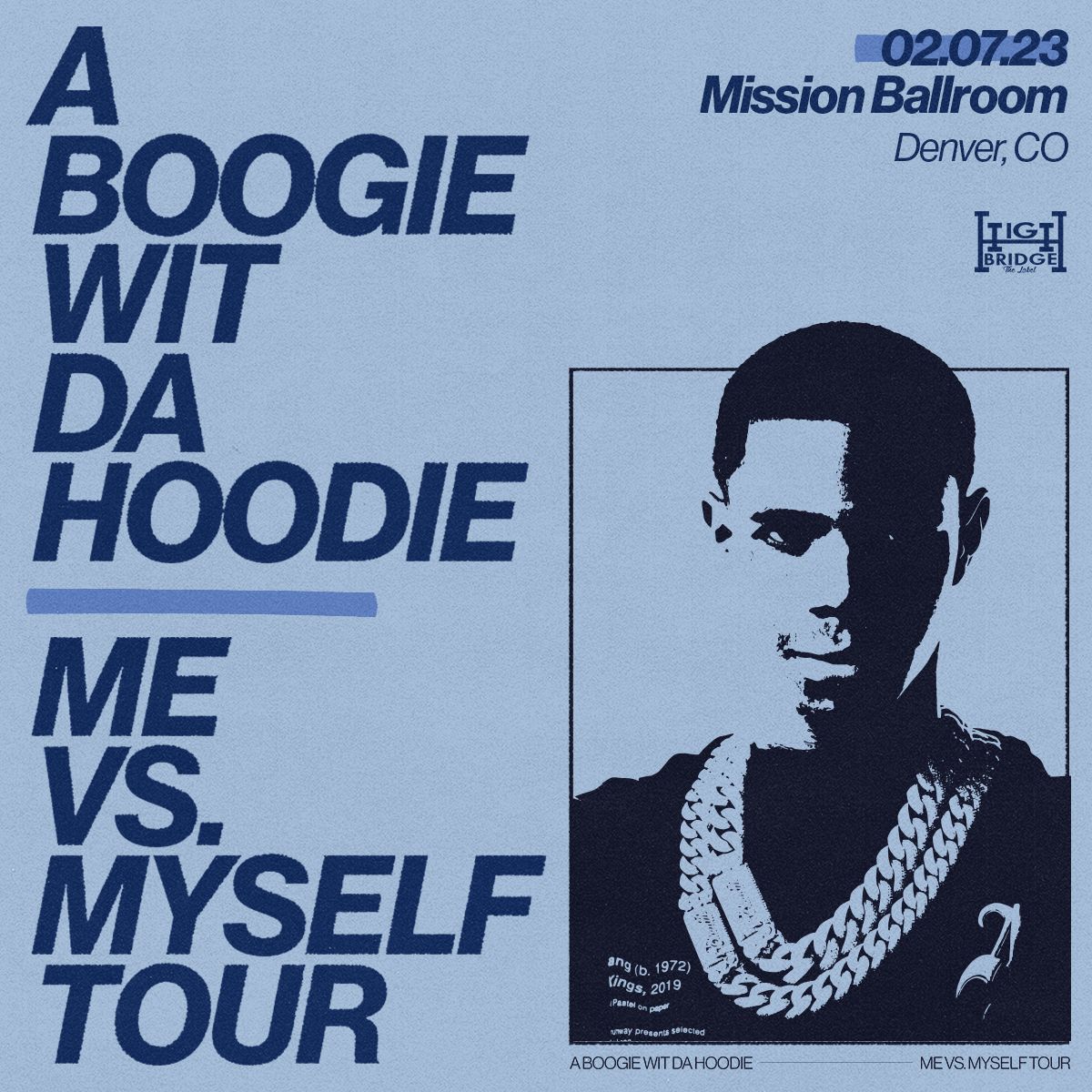 Me Vs. Myself Tour ft A Boogie Wit Da Hoodie February 7th at Mission Ballroom! SOLD OUT - ENTER OUR SWEEPSTAKES FOR YOUR CHANCE TO WIN 2 TICKETS

Me Vs. Myself Tour ft A Boogie Wit Da Hoodie