The Story of Krakyn | Chapter III: The Katalyst 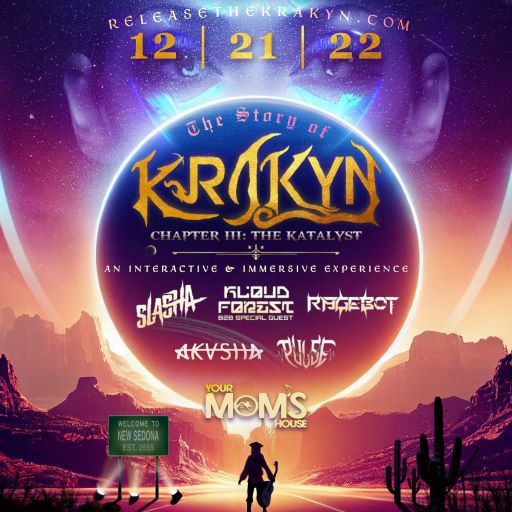 The Story of Krakyn | Chapter III: The Katalyst An Interactive & Immersive Experience December 21st at Your Mom's House Denver The year is 2555, realities have been

The Story of Krakyn | Chapter III: The Katalyst
An Interactive & Immersive Experience
December 21st at Your Mom’s House Denver

The year is 2555, realities have been tangled from the quantum array exploding in New Sedona, AZ. Solaris, the galaxy’s sole producer of clean quantum energy, stated things may have gotten a little weird after the explosion, and certain parts of New Sedona may have merged with distant realities, some realities they have identified being merged with are Denver, CO, year 2022, and a section of the Norwegian sea of 1777.

Solaris put out a statement saying “We don’t know how long till we can get things back to normal, but one things for certain, on the Winter Solstice of these distant realities, people from those realities will be able to see and experience things from these other realities, including our own, so expect some new faces around on that date, but be friendly to them, they may be lost and a bit scared, some may be excited to see our futuristic world, but they won’t be here for long, it’s just a side effect that happens on the Winter Solstice in the quantum field.”

To our visitors from Denver, CO of 2022, welcome to our beautiful utopia! 2022 was quite a long time ago, quite a bit has changed. The planet is drastically different now, but humanity is still alive and well. It looks like a few things from our world has merged with yours, such as our city’s bazaar of arts and one of our cantinas. Some parts of our canyons and wildlife have also come into your reality (watch out for the Andromedin geckos, those little buggers have been wrecking our local eco system ever since they were brought over from the Andromeda Galaxy). It looks like a couple of our musicians have also merged with your reality, and some of yours have merged with ours, which is actually pretty cool, suppose since we won’t be together for long, let’s have a little party while we’re all together shall we? See you on the solstice, Galactic Citizens